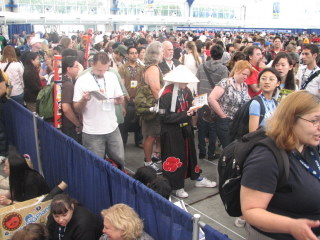 I’m writing this after getting home from the Con. The last couple of days started early and ended late, so I didn’t get a chance to make the posts at the end of those days. It’s time to catch-up, and I’ll stick to a daily summary.

This is your traditional picture of the starting gate on day 4. These lines are surprisingly orderly considering the size of the crowd. 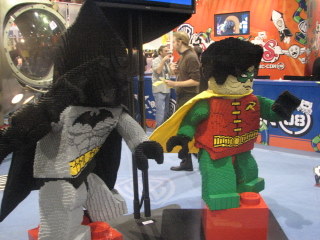 There are a surprising number of Lego statues throughout the exhibition hall. Although this particular depiction is rather cartoonish, there are a number of intense statues of the Dark night and other large characters. 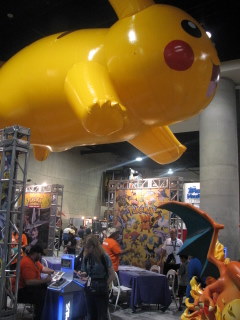 Certain booths stand out because of the sheer size of their props. A gigantic, inflated Pickachoo was one of those landmark sites in the exhibition hall.

I’ve pretty much kept to sampling a small number of these booths with pictures. I could put up hundreds of interesting pictures of the various booths and their decorative themes. Comic booths, toy booths, movie and TV booths, gaming booths, book publisher’s booths, and collectible booths all are trying to get your attention with banners, statues, celebrities, and booth babes. It takes something pretty impressive to stand out.

Speaking of impressive, Linda Barry is one of the cartoonists that was a guest of the convention. She has a new book out and I had the chance to get her autograph on my copy. It was also one of the few things I picked up that I knew Harriet would enjoy, so I had her sign it to both of us. Linda Barry is one of the nicest people, and as I left she wanted me to be sure to say “hi” to Harriet for her. 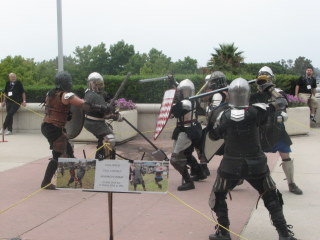 Throughout the Con, this group puts on full combat demonstrations with classic armor from a variety of historic periods. The weapons are not made from steel, but from wood and plastic. They do provide full contact and you can hear the WHACK of the swords striking the armor. Tagging the head is a “killing blow” and the receiving player must drop to the ground and die. The last one standing (or in this case, the last team standing) wins. It’s all very exciting to watch. 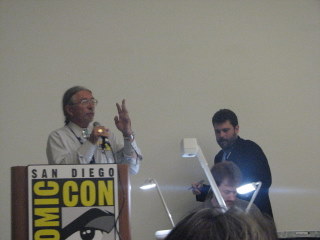 Saturday has a lot of the TV and movie panels that are super popular (i.e. CROWDED). I skip those, and spend most of the day on the floor visiting the smaller publishers and artists. However, there is a benefit auction in the early evening, and I really enjoy attending that. Quite a bit of original art and unusual collectibles are available, and the auctioneer is fantastic. It’s worth attending just to watch him. 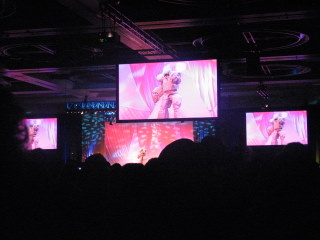 And later in the evening is the grand event: The Masquerade. Just calling this a costume show is a disservice to the amount of effort that goes into these small performance pieces. Each entry consists of costumes and some sort of song or skit that adds a level of musical theater. This stone-like character (think of the creatures from Galaxy Quest) danced to the Queen tune with the lyrics “We will rock you.” 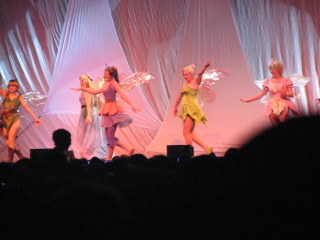 You can see the number of screens that display what’s happening on the stage. Although that gives you a sense of the size of this room, what you don’t know is that the same images are transmitted to two additional conference spaces and the large open area in the upstairs part of the convention center (the Sails Pavilion). This event is wildly popular, and there’s cheering for favorites, and boos for underwhelming performances. It’s a complete spectacle. 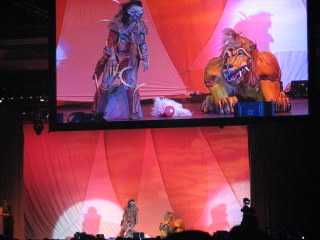 There are 40 something entries, and the event goes on until well after midnight. I didn’t stick around for the final judging, or I’d still be there. It is a lot of fun due to all of the enthusiasm displayed, and some of the pieces are so inside the geekway that no gets all the references. That just makes it even more fun.

I’ll close with a random selection of pictures of costumes from today. 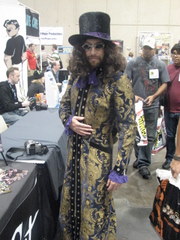 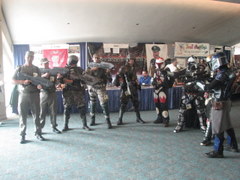 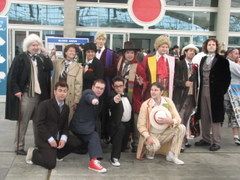 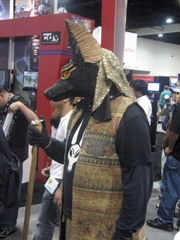 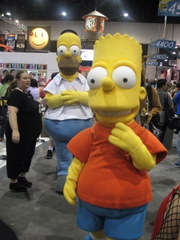