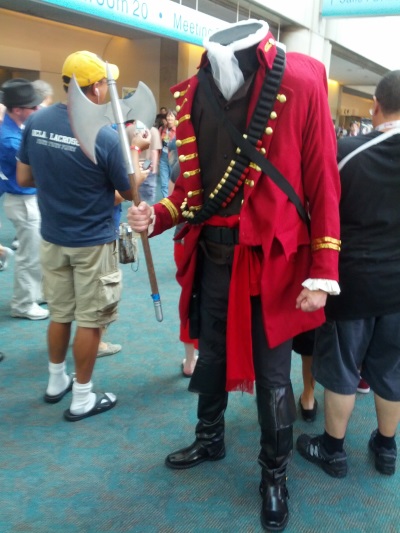 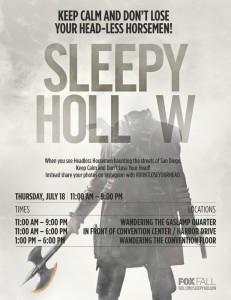 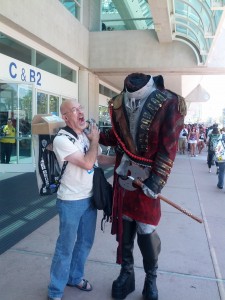 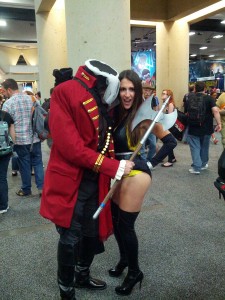 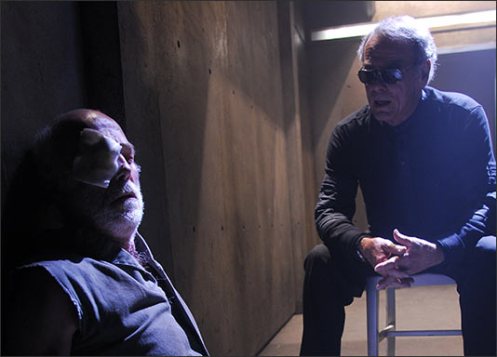 Political? Not even subtle!

The best hour and a half of science fiction video ever? Without a doubt!

I think it took a couple of days just for me to be able to write out my thoughts, and it still feels like a lot of fanboy “Oooooh! Ahhhhh! Wow! Whoa!”.

I’m not even sure if I can effectively describe how they pulled off showing an insurgency, complete with suicide bombers, as the good guys! And portraying a monotheistic occupying force using torture, random arrests, and executions as the bad guys (okay, maybe that wasn’t so hard).

For the characters, four months have gone by since the end of last season when the Cylons occupied this little colony of humans. In this season opening, they’ve shown us the horrific state that has developed over the four months, and in doing so they’ve created a metaphor for Iraq – with us rooting for the insurgents!

This was the type of show that I would only butcher by trying to describe it. You need to see it for yourself. There isn’t anything graphic. The violence and horror are pretty much off screen and in the back story. But you see the impact on the characters. And in that, it’s even more horrific. The picture I posted above – yup, it’s that scary.

Harriet was out of town this weekend (someday I’ll write about “The Elves”), and so I decided to get caught up on a lot of videos. Most important was getting through the typical three Netflix DVDs which are kept sitting around for weeks. 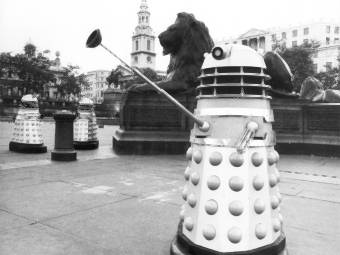 I chose to watch some old Dr. Who episodes from 1964! One DVD collected the story arc titled “The Dalek Invasion of Earth” and consisted of 6 episodes. A companion DVD had extras like interviews of actors and designers who were still alive, as well as video clips about Dr. Who from that era. Even though it’s got a lot of cheesy effects and huge plot holes, there’s still something absolutely charming about it. Look at that picture of the Daleks in Trafalgar Square! They had a plumber’s plunger as a weapon and they still took over the Earth.
It’s sort of like watching the original series of Star Trek. The shows are dated and yet redeemingly sincere. I had a great time watching every minute.

I’ve recently gotten hooked on Dr. Who thanks to the new BBC versions. I never watched the series as a kid. I remember being put off by the goofy costumes and rediculous plot line. Of course, why I thought Star Trek made more sense is as much a mystery. The new series captured me because the characters are just so gosh darn enjoyable. The Doctor is fundamentally an optimist, and he enthusiastically enjoys every new experience. This show is just fun to watch.

I’m slowly working my way through the old shows, also. The BBC has lost quite a few of the shows from the first years, but they stil have an amazing amount of video from this longest running sci-fi series, ever.

Okay, there are two new shows that I watch regularly, now. The first is Studio 60 on the Sunset Strip. It’s on Monday nights, 10:00, on NBC. It’s Aaron Sorkin’s latest series. I loved Sports Night and West Wing for the same reason I’m loving this show. Brilliant writing with really smart characters. Matthew Perry (Friends), Bradley Witford (West Wing), and Amanda Peet (various movies) are the stars, but they’ve got a great supporting cast of characters, and they deal with interesting issues that come up when putting on a cutting edge comedy show for a national tv network. It’s really, really good. I’m laughing and teary eyed at the same time.

The other show I’m watching is Heroes. Also on NBC, also on Monday nights, but at 9:00. This show appeals to me because of its obvious superhero connections, but what’s interesting is how much Harriet likes the show. The characters are intersting, and the mystery surrounding them keeps us really focused. As long as they keep revealing more of the mystery fast enough, we’ll keep watching. But, I hope it doesn’t become like Lost for us. The first few shows of that series, we were completely hooked. But it was too S L O W, and when we missed a couple of shows due to travel, we didn’t go back. I hope Heroes keeps us more tightly engaged.