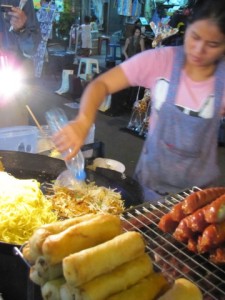 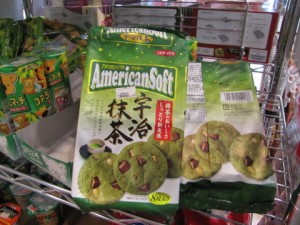 Twenty-something years ago we tested our blooming relationship with a month-long trip to Thailand. Having both matriculated, we find ourselves here once more, this time on our way to Laos and testing only the limits of how much we can eat in day. So let’s just cut to the (culinary) chase, shall we? (Cultural and other observation to come later.)

Exotic lowlights: Prior to arriving in Bangkok, while cruising the Narita airport (Tokyo) we spied a bag of cookies that aptly describe us. (See unretouched photo.) Passed on those. Then there was the boneless, skinless, chicken breast shaped object (served with childhood memory-riddled Swanson Turkey TV Dinner “stuffing”) which was bizarrely sponge textured but admittedly moist and somewhat flavorful. 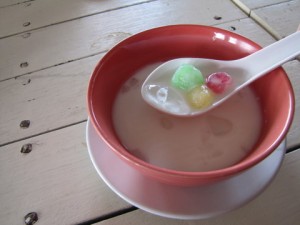 Okay, on to the real grub highlights. The Thai rep for Alan’s company took us to lunch at a lovely open air restaurant near the river. He and his wife ordered up a tsumani of food which we tried in vain to finish. First up was a pot of Tom Yum soup with an intensely flavored broth that had a hint of Chinese five spice powder. Excellent. This was followed by small disks of fried fish cakes with a sweet chili sauce and crispy fried basil. Extraordinary. Must ask Su (the rep’s wife) to help me find a jar of the right sauce, and figure out how to deep fry basil… a lot of basil. Garlic pepper greens. Lovely. Then came the salt-crusted sea bass with two sauces – the first, almost a lime-infused tomatillo salsa; the second, a sweet garlic chili. Ecksanser asked Alan if he wanted some rice, and our best-mannered boy, expecting just a little bowl, replied, sure. So out comes an enormous platter of crab & vegetable fried rice. I could feel I was starting to expand – especially since I’d already downed a Thai iced coffee and an entire coconut milk/water served in the fresh husk (Alan had a beer) – but I’d lost all self control by this point and couldn’t stop. Ecksanser and Su picked up the menu again and we assumed they were going to order a little sweet for dessert – which they did – but not before the gigantic grilled langostines. Oy. Finally, the Siamese Fantasy Ruby arrived. Colored, grape shaped, gelatin-like covered nuts and thick batons of coconut swimming in an iced “soup” of sweet coconut milk. While not on par with, oh, say gelato or a flourless chocolate cake, it was damn good. 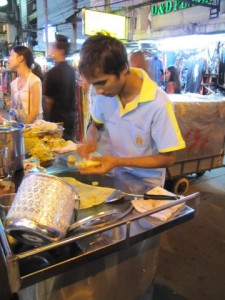 We worked off the soup by walking to the Air Asia office to arrange our flight to northern Thailand (with a plan to cross overland into Laos). There we met a South African version of The Illustrated Man. With the exception of his face, every square centimeter (yes, EVERY) is covered in gorgeous, fluid, vibrantly colored tattoos. Evidently, he had recently attended a big tat convention where we’re sure he was a standout. We had a little trouble following his spiritual philosophy but got the gist of his struggle including the daily shrouding of multiple gods (the Ganesh covering his left forearm is exquisite) on his body when he does morning meditation. Observant Jews are forbidden from getting tattoos yet he sports a penny sized Star of David on the crown of his head. Actually, we had trouble following pretty much everything he was babbling about but thoroughly enjoyed the corporal art show.

If you’re reading this, I didn’t die from snacking on fresh jackfruit at the night market. The size of a large watermelon, jackfruit has the texture of a green pepper with the flavor a cross between pineapple and mango. It has moved pretty high on my favorite fruit list. We followed up with a light dinner from street vendors: banana & Nutella roti (Indian pancakes) with sweetened condensed milk ($1.30); huge pahd Thai with egg ($1). Oh, and for those of you who were concerned, 7-Eleven stores abound so there’s no shortage of diet soda for Alan.

The bad news, good news, bad news? I forgot to bring a belt for my loose fitting travel pants — not going to need one. 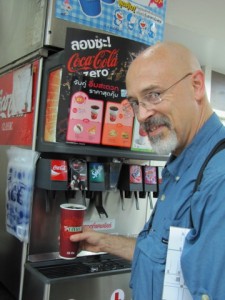 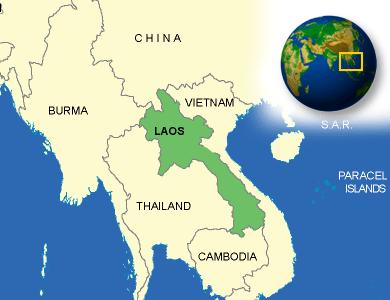 Despite all of our trips to Southeast Asia, Laos is the country we’ve always missed. We’d thought of it as the sleepy neighbor of Vietnam and Thailand, but we’ve met a lot of travelers this year who’ve said that it’s a must see. Beautiful vistas, interesting temples and sites, fabulous food, and cheap – which meet all of our travel requirements.

Once again, our plans are extremely flexible. We have round trip tickets to Bangkok, and we’ll be arranging our entry into Laos from there. We’ll spend two and a half weeks in Laos, and then we’ll return to Bangkok for just over a week. We’ll be back in the US in time for Thanksgiving.

It turns out I will be working for the last week in Thailand. My company has a contract with the Royal Thai Navy and I’ll be on-site to provide training and installation. I’ll also get a chance to visit some other business related sites, so there will be some novel elements to this trip.

We will continue our tradition of blog posts with pictures and Harriet’s travel commentaries. She swears she’s going to finish the incomplete entries from previous travels, but I’ll be thankful if we just make more timely updates. I’ll be traveling with more electronics than usual (due to work) so we’ll see how that impacts our overall communications. I’ll be making Twitter/Facebook updates, so you can find periodic summaries here and follow us in real time at Twitter as @alanirwin. And we love email!

And now back to packing.