I just came across this image which was taken quite some time ago (pre-2006). I was at work testing an infrared camera, and I captured this picture to see the camera’s responses to various temperatures. This wasn’t an official test, just an informal (and amusing) experiment. The camera isn’t in great focus, but come on, it’s a thermal image of me drinking from my infamous soda mug.

To interpret these sorts of thermal images, the dark parts are cold and the whiter parts are hot. The colder an object, the darker it appears. So, my balding head is hotter than my beard and glasses. Even better, you can see that the straw in my mouth is really cold because I’m sucking up some refreshing, ice cold diet coke.

Now some of you may be asking ‘What are you doing with an IR camera?’ At some future point, I’ll make a more complete post about the nature of my work – but for now I’ll just say that I develop test applications for the infrared industry. 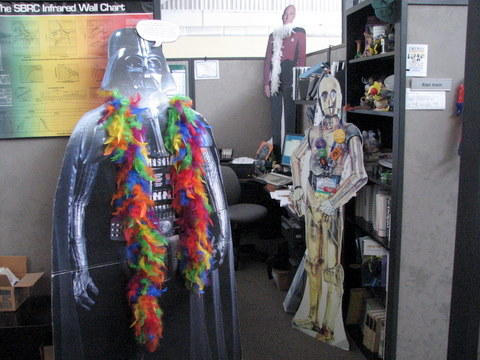 It’s been awhile since my last posting, mainly due to some intense deadlines at work. At some point I’ll make some sort of a post trying to explain the project that has been taking up so much time, but for now, as a start to some catch-up posts, I thought I’d introduce my office. Since I’ve been spending a lot of time there, it seems only natural to make it a blog posting.

I’m not going to give an overview to my company, Santa Barbara Infrared, Inc. (SBIR), here. That will be another post at another time. For now, I just want to show off my cubicle. The leading picture at the top of the post is the entryway. And yes, that is a giant cutout of Darth Vader with a brightly colored boa. Just inside is C3PO and in the back, standing on my desk (right next to the computer) is Captain Jean-Luc Picard, also with a boa. 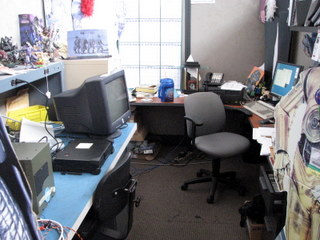 Let’s go inside, shall we? As you can see, It’s a fairly basic cubicle with some customization (pimp my cube!). On the left is my workbench, complete with anti-static mat (checked regularly for grounding) and currently occupied by several pieces of equipment. There is a file cabinet at the far end. On the right is my main work table with the computer and some references. Further to the right (behind C3PO) is a bookshelf with references, and in the back is an additional work table with some files and my calendar. All fairly normal. You can even see my (in)famous blue mug on the back table. 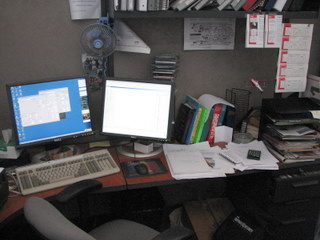 A better view of my main work space: computer with two monitors, chair, references, piles of paper for currently active projects. On the right, taped to the upper shelf is a set of comic strips I write and draw for our newsletter. It’s amazingly geeky, and the jokes are very “inside” for the IR community. Someday I’ll collect and post them, but we’re not talking Dilbert here. 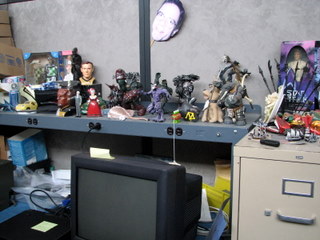 This is the shelf above my workbench and the top of my file cabinet. I’m of the “shovel it on” school of decorating. No subtle layout focusing on a specific genre or even specific interest of mine. Nope, you’ll get some kind of prize if you can even identify all the geek-topics represented in the chaos of those figures. And this is just one side of the cubicle. On the other side… 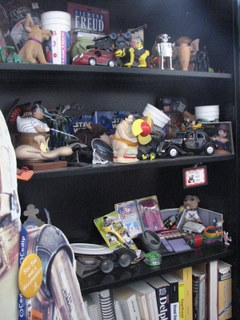 …is my bookshelf. Reference materials are on the bottom 3 shelves. The upper levels are all toys, figures, and memorabilia. There’s more up higher, but the light washed out the pictures of the top shelf. One of the interesting aspects of this collection is the way many of my co-workers hand over items with the phrase, “this belongs in that collection”. I don’t know if their spouses force them to unload items to which they’re attached or whether there is some sort of chaos threshold where this kind of non-sense become altar-like. But, I have to admit that many of the items on the shelves are more like offerings made by other folks at work. Along with that odd sense of reverence, many folks include my office in the tours they give friends and relatives (customers are “stuck” coming to my office). 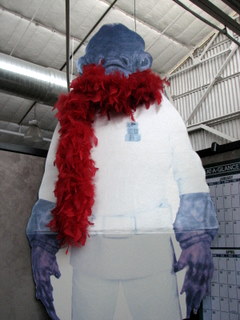 Just to complete the tour, I’ll give you three quick close-up shots of the characters in my office that have been given boas. I did not think to put the boas on the characters, myself. That came from co-workers who had the boas and asked if I would be willing to give them a home. It was the perfect accessory to make my office-mates fabulous. Admiral Ackbar is from the third Star Wars film (Episode 6, Return of the Jedi in the wacky naming scheme). I use him as the super-secret password of the IRWindows program (which is an indication of how broadly I believe this blog is being read).

No doubt about it, Jean-Luc Picard with a boa looks fabulous. You can probably tell from this shot that the cutout stands “head and shoulders” above the cubicle walls. I use him as a landmark when giving directions – “head towards Picard and you’ll find my office”.

The man in black needs the multi-color boa. Darth is the official greeter to my office and so you get a sense of the dread folks feel coming to see me. As an additional feature, I added our official company ISO-9001 Commitment to Quality Statement in a word bubble. Nothing says commitment like hearing your official statement come from Darth Vader’s mouth. 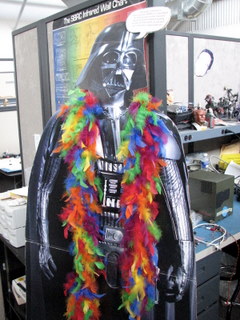 So that’s the tour. I like to think of my cubicle as “Geeky Chaos Surrounding a Passive Aggressive Core”. It somehow says “come on in, it’s fun in here” and at the same time also says “keep out – I’m on a hair trigger and could bite your head off”. I like to think that it keeps my managers and co-workers on their toes.