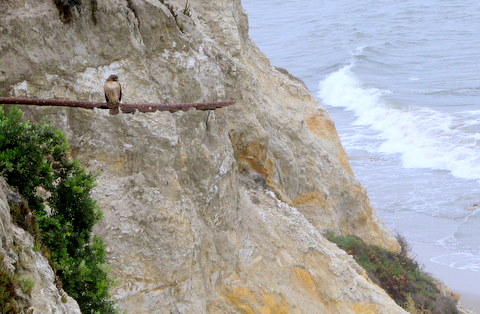 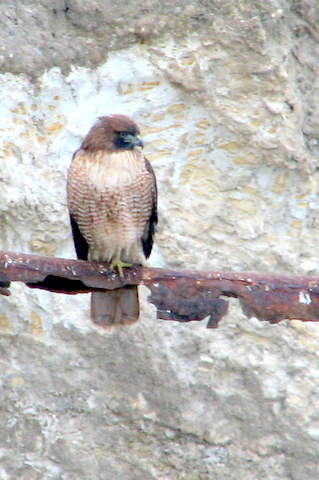 Harriet and I attended the Santa Barbara Festival of Art, which is happening October 13 through 15. It takes place in the Santa Barbara Courthouse’s Sunken Garden, which is a beautiful setting. There are some great, inflated sculptural pieces on the front lawn which are very fun. They look like pieces we’ve seen in the Solstice parade. In the sunken area, there is some great, live music playing. And, there was a pretty good crowd attending.

But, I must admit we were a bit disappointed. The festival has been going on for 8 years now, and lately it’s been getting smaller and smaller. Last year, several of the artists we talked with were clearly unhappy. The turnout was low and their sales were not enough to cover their expenses.

This year, it feels like they may be trying to re-energize the show. The entrance was free, whereas in the last few years we had to pay an admission. They had an area for cooking demonstrations, and Harriet attended one of those. She was pretty underwhelmed by that specific demo, but to my benefit she was influenced to make some amazing crab cakes.

The booths seemed to be mainly jewelry booths, and most of those seemed to be found-object crafters. There were only a couple of vendors that seemed to have elevated their craft into interesting art.

We did enjoy the juried show by the Santa Barbara Art Association. A couple of those pieces were very nice.

Does Santa Barbara may have too many art festivals? It seems like we just had the Artwalk at the Santa Barbara Natural History Museum. And this show is too early for the Christmas buying season. I’ll check it out again next year because I remember the show fondly from its early years. But for now, I’m not sure its worth the entrance fee. 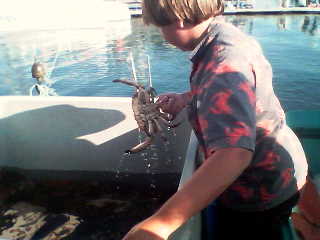 Yesterday, we also got over to the Santa Barbara Harbor and Seafood Festival. That was more fun, but we got there about a half an hour before they planned to shut down, so we didn’t get a lot of time to explore. Still, I don’t know whether we would have stayed much longer. It’s a fine festival, but not a lot to do.

The big draw for us is the seafood. And they had some great deals. I took this shot of the kid who fished out Harriet’s two live crabs. She had to get them when she saw the price was $1.50 a lb. There was also a variety of fish and other seafood from fishermen on the pier with their live catch. A variety of information tables running the gamut from environmental groups to navy recuitment were also located on the pier.

We did get a chance to eat some of the fine seafood that was available. Harriet got a couple of fresh oysters, and I had the best BBQ albacore. We also got some ableskeevers sold by a baker who was out from Solvang. Very tasty!

The music was pretty good. A band doing cover tunes from our era was playing . A variety of craft booths sold some things that weren’t terribly interesting (maybe I’m just jaded). Harriet did get me an Indonesian batik shirt for $10, although my contention was that we’ll be able to get a lot more of those for $1 in malaysia. She and I channeled each other at that moment.

We also passed a place with Teva sandals on sale. Harriet found a pair she likes, and bought them. One less item on our list to do before we go.

On Thursday, the weather changed and a storm was predicted to move in. Well, that evening we had a spectacular sunset. I know that I don’t spend enough time appreciating the Santa Barbara views, but that evening I found myself with a large crowd at Shoreline Park, gawking and trying in some small way to capture it all. 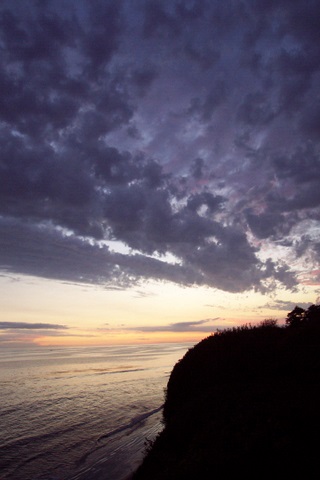 I’m no photographer, but I really didn’t need to be. The colors and textures just laid themselves out, begging to be recorded.

The irony is, we barely got a spritz from this storm. Just North of us, they received a good soaking, and I believe the storm hit south of us, also. For some reason it jumped by the Santa Barbara City area, lingering just long and low enough to give us some nice views.

And I just happened to have a camera in the car.

We have a Caught in the Act show coming up Saturday October 21. For now, you can find the particulars in my Improv Blog post.

Last night we had a Caught in the Act meeting in order to get ready for the new show. Improv ‘rehersals’ are a chance for the troupe to work together, try out some new games, and plan which pieces we’ll perform. We’ve lost one player and are looking to bring in some additional players, so it’s also a chance to start learning each other’s rhythms.

Every year, the Santa Barbara branch of Planned Parenthood puts on a big used book sale as a fundraiser. This thing is HUGE, taking up a large hall in the local Earl Warren Showgrounds. It’s pretty well organized with the books divided into categories, lots of tables, and boxes and boxes of books. A book browser’s dream.

They start on a Thursday night with a special preview. You pay to get in on that night (this year, September 21) for a first crack at all the books. They also serve some food. Harriet attended that event and had a great time elbowing through all the dealers. She came back with the first box of books.

This thing goes for nine days! We each went back individually and together. We brought back a couple more boxes of books. Then, on the Sunday a week later (yesterday, October 1) they have a 1/2 price sale to try and get rid of the last of the books. We were there again and got 2 more boxes of books.

I’m telling you, no willpower. All we needed was the excuse “it’s for a good cause” and all inhibitions are lost.