Ben & Jerry’s is recalling 250,000 pints of their Country Peach Cobbler Ice Cream. It’s a voluntary recall due to their discovery that wheat wasn’t listed in the ingredient label but is in the product. This is only a risk to those with severe sensitivity to wheat, but the company decided to recall the product.

The complete story can be found here. 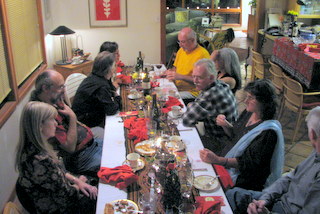 The crowd is a fairly eclectic mix of folks, many of whom only know each other from this annual dinner. This year we had 16 people attending. I can’t seem to find a photo with the whole crowd at once, so this first photo was taken fairly late in the evening after several people had left. Around the table, starting at the lower left, are Krista (our fabulous neighbor), myself, Steve (our other fabulous neighbor and Krista’s husband), Marla (Harriet’s wonderful sister), Perri (Harriet’s Sister’s tenant-but really an amazing fellow) , Harriet, Steve (our fabulous neighbor’s fascinating friend), Tara (groovy friend and fantastic house/dog sitter, who took care of our place while we were in Malaysia), and Dave (our fabulous neighbor Steve’s delightful brother). Hmm, maybe Thesaurus.com isn’t as cool as I thought. 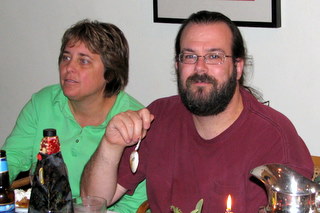 I’ll be filling in the full cast of characters with other photos taken earlier in the night, starting with this one of Diane and Wayne. Diane’s a friend I’ve known longer than Harriet; we met in Helpline when we were both doing suicide hot-line work (we were the volunteer counselors, not the callers). Nowadays she’s a technical writer for a medical devices company. Wayne is an old gaming buddy who is now a math professor in San Diego. Can you believe that Wayne, Diane, and I were gaming geeks? Okay, maybe that’s not such a stretch.

Moving on to the ‘not so geeky’ people in attendance, I really like this shot of Grace, who apparently fell asleep by the time the group photo was snapped. She was on East Coast time, having just moved out there this last summer. Grace is another long term friend (I’m trying to avoid the word old since it has too much weight for many of us) that I first met at my bank (she was my teller) but whom I got to know during my years as a volunteer at the Santa Barbara Rape Crisis Center. She was a volunteer and then a staff member and is now working as a school psychologist. It was wonderful having her out to visit for the holiday and we missed her partner John who was at the dinner last year but didn’t make it to this one. 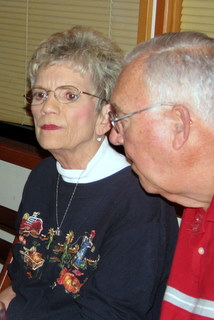 These two are Cecile and Royce, Laura’s mom and her husband. Unfortunately, I can’t find a picture of our friend Laura who was also at the dinner. My bet is she’s now so skinny that the camera couldn’t capture an image. Either that or she intimidated the camera with her kick boxing moves. We’ve known Laura for a couple of years now, and she works for a local medical devices company in some sort of regulatory capacity, although her job has been going through so much flux in the last few months I don’t know if she could tell you what she does. It was delightful having her mother and Royce at the dinner, and they brought sweet potatoes made southern style, complete with the marshmallows. 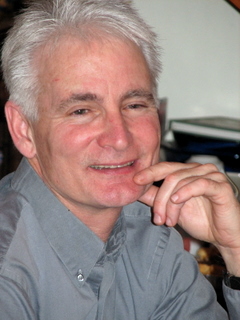 Dave is one of those photogenic folks, and a true techno-gadgeteer. He’d probably be happy to know that I had to use a red-eye removal tool on this photo to get it ready for publication. He’s Steve’s brother and currently a manager of a William Sonoma store in LA, but he managed a Stabuck’s for years, and knows a lot about coffee culture.

I don’t have a good shot of Steve and Krista, our neighbors. I can’t say enough good things about the two of them, and both Harriet and I are thankful they live next door. Both of them are graphic artists. Krista works at a financial services company as the in-house graphic designer, and Steve works at UCSB doing graphic design. If you’ve ever logged onto one of the UCSB department web sites and thought “Wow, that’s beautiful” then it was probably Steve’s fault. 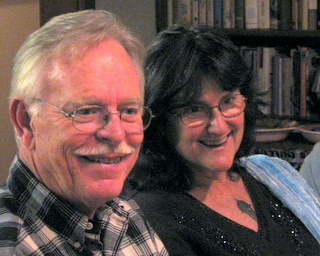 I like this shot of Steve and Tara. This is the other Steve; not our neighbor Steve, but Steve’s friend. Got it? Currently retired, Steve is enjoying a life filled with wind-surfing and rock-gardens. We’ve known him a few years now and he’s really a delightful guy to talk with and definitely fits into the eclectic category.

Tara is amazing. I can’t do her justice in a short paragraph, and although she’s most easily identified as our house/dog sitter (the dogs love her), she’s probably the person we know who most closely fits the term scholar. She’s the sort of world traveler who will arrive at a town and decide to stay and work a few months, learn the language, the culture, and as much about the people as she can. We’ve known her for years and is an amazing soul.

Although this photo is from a couple of days later, it’s a great shot of Perri, Marla, and Jori (and our dogs Katie and Buster). Marla is Harriet’s sister, and Jori is Marla’s son, our nephew. They all live in San Francisco, where Marla works on and off as an instructor and developer of educational materials/programs. Jori is an incredibly cool 10 year old who is showing promise as a comic book aficionado.

Although I’ve known Perri for many years as a tenant and friend of Marla’s, this is the first chance I’ve had to spend any significant time with him. They spent four days here and I would have loved for them to have spent more. He was a great cooking pal for Harriet and just fun to be around.

And that’s the summary of this years Thanksgiving. Thanks to everyone involved from both Harriet and I. We are thankful you are all in our lives. 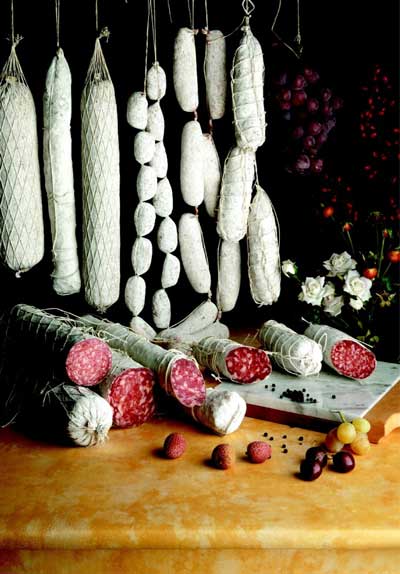 My most favorite food place in all the world, C’est Cheese, had another tasting tonight. But rather than cheese, the tasting was salami. Cured, smoked, dried, salted, and seasoned; thin, thick, narrow, or long; Itallian, Spanish, French; shoulder, belly, ham, or back; but all pork. And all delicious.
One of the things I like most about Kathryn and Michael’s presentations is that they give a lot of information along with a good variety of flavors. So, I have the list with the names of all nine salamis (on which I scribbled my tasting notes), but I’m only going to mention the ones that stand out.

My favorite spiced salami was the chorizo. I’ve eaten a lot of chorizo in my life, and this was the best chorizo I’ve had. Delicious on its own, this would be fabulous cooked in any dish.

The biggest disappointment for me was the Salumi Mole, which was flavored with the spices you’d find in a mexican mole. I don’t think it worked in the salami. It was a lot of heat without the sweetness of a good mole.

The other salamis I enjoyed were: Niman Ranch Napoletani, a small, spicy salami that will sadly be discontinued; Fra’mani Toscano which is flavored with garlic and wine; Salumi Salame with a hint of ginger; and Prosciutto di San Daniele, which isn’t really a salami, but is a very tasty cured ham.

All of these are available at C’est Cheese, and I plan on staying stocked up around here, too.

Last night we had our neighbors over for dinner. Harriet was highly motivated since we had two live crabs from the Santa Barbara Harbor and Seafood Festival, and she’d sat in on a cooking demonstration at the Santa Barbara Art Festival (both discussed in my last post). So, she made crab cakes.

I’m not a food blogger, so I won’t go into the recipe. But, I am someone who appreciates good food, and I have eaten a fair share of crab cakes. These were, without a doubt, the best crabcakes ever. And I mean they were GOOD! She says she wasn’t happy with the recipe she got from the demo, so she worked it over a bit. And, the crab was obviously very fresh. But all of us stopped after we took our first bites, looked down at the food, and just blurted out how good these were.

We also had a very good salad that was a good counter to the richness of the crab. I think we all ate three of the cakes, and then had to stop because the crab is so rich. Well, that and the fact that there weren’t any left. Restraint is easy when there’s no opportunity. I learned that one from dieting.

Just for completeness’ sake, I will say that we had a great time with Steve & Krista. We are very lucky to have such wonderful neighbors, whom we actually enjoy spending time with. I’d say more about them, but that’s really for Krista’s blog.

And besides, those crab cakes were damn good.

Friday night, Harriet and I ate at the Itsuki Restaurant on Calle Real, between Highways 101 and 154.

It’s a really good Japanese restaurant that’s pretty small and informal. They have a wide variety of sushi and combo plates, but my preference there is the Oyaku Donburi bowl. This has egg, chicken, and a variety of vegetables on a bowl of rice. Way outside my low-carb target, but still plenty tasty and nutritious.

Harriet got a teriyaki salmon combo plate, which she said was pretty good but did not have enough salmon.