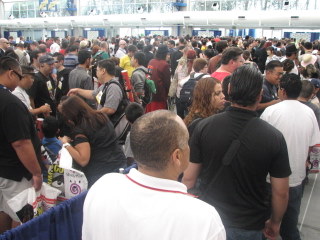 Here’s the last write-up on this year’s San Diego Comic-Con. The fifth and last day of the Con (including the preview night) is both a relief and a sadness. There aren’t as many pictures from this day, but I was just as active, walking the exhibition hall and sitting in on a couple of panels. Here’s the final exhibition hall opening line photo. 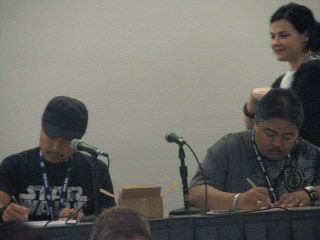 I attended the Live Art Jam; another fund raising event for the Comic Book Legal Defense Fund. Four well known comic artists draw sketches for over an hour and talk a bit about their process. At one end of the table is a station equipped with an overhead camera, and the images are projected onto a big screen. The artists take turns sitting at that station allowing you to see what they are doing while they describe it. I find it fascinating even though I don’t do a lot of drawing. These guys are the best in their field, and it’s mesmerizing to see them working. 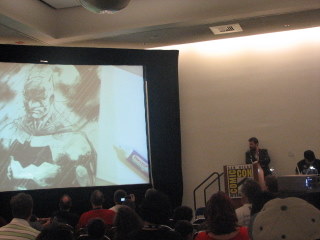 This is Jim Lee who is one of the two or three top comic artists working today. He talked about adding various effects to a drawing, and one of them was a technique he had never tried before. He asked for (and received) a tampon from the audience and used it as a brush to add the dark broad strokes in the drawing. In the end, he wasn’t too happy with the technique because the tampon was too absorbent. He couldn’t get the dry-brush effect he wanted. Still, the sketch was frickin’ awesome.

In the end, all the pieces drawn during the event are auctioned off (hence the fund-raising aspect of the event). I believe the Jim Lee Batman piece sold for close to $2000. 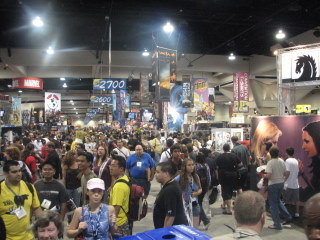 Although you can’t tell from this shot, the show starts to run down in the afternoon of the last day. Marketers are trying to unload the last of their give-aways, the vendors are offering big discounts to unload their wares, and the professionals behind the booths are just trying to unload. Folks are tired.

I did a final walk through the exhibition hall, and at one point went upstairs to pack up the items I put in the Art Show (nothing sold, unfortunately). I got this shot looking outside at the Gas Lamp district of San Diego. I left the Con at about 4:00 in the afternoon and headed back to Santa Barbara.

Here are the last few costume photos I took. Enjoy! 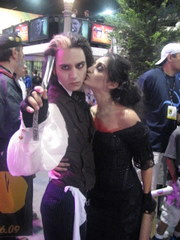 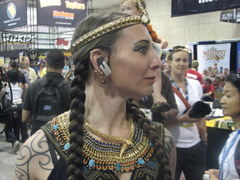 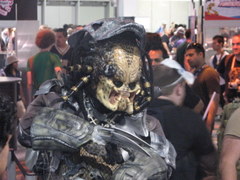 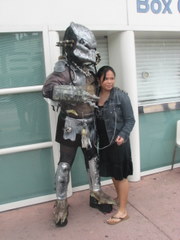