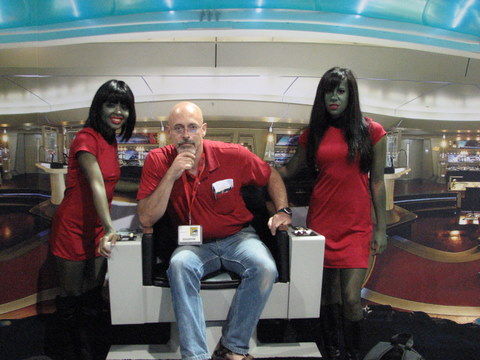 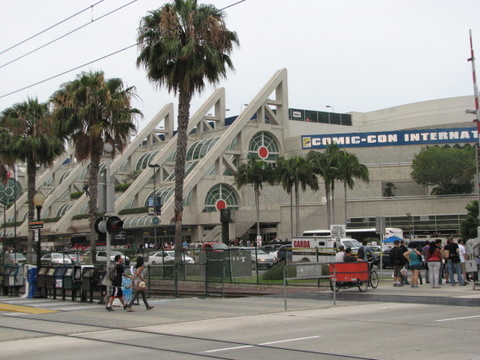 The 2009 San Diego Comic-Con happened from July 22-26 (I’ve posted close to 100 photos from the con at my album.). This was the 40th anniversary convention and my 4th time attending. More “pop-culture happening” than “comic book convention”, it was a chaotic mix of comic books, TV, film, games, art, toys, collectibles, cosplay, books, martial arts, theater, tourism, fantasy, and commerce. It’s hard to describe what I love so much about attending this conference, but if I had to choose one thing I’d say it’s the energy of being surrounded by 125,000 people passionate about some aspect of pop-culture. In other words, geeks. 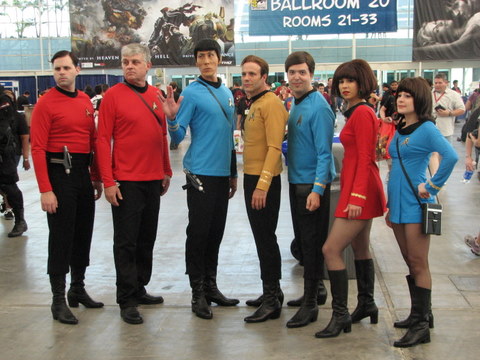 After four full days of the convention plus a preview night, I’d be hard pressed to give a detailed account of the entire convention. You can find several comprehensive reports of the convention on-line, so here I’m just going to give some of my random thoughts (and a sample of the photos) in no particular order. 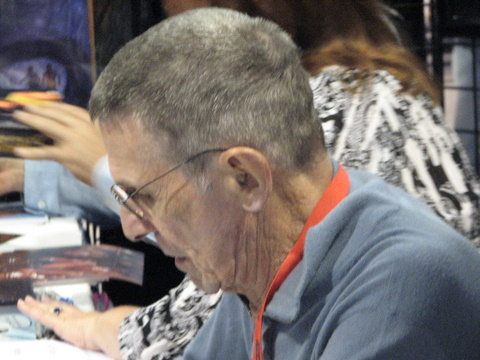 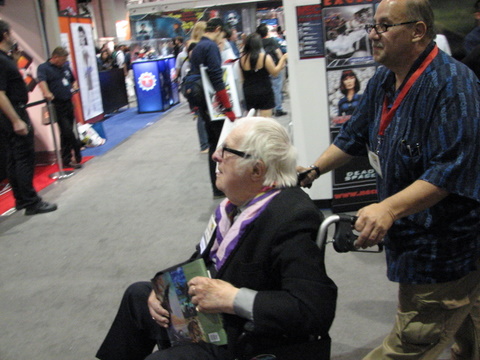 There are plenty of celebrities in attendance, mainly signing autographs or pitching their latest projects to the fans (and occasionally wandering the floor). Here are Leonard Nimoy signing autographs and Ray Bradbury being wheeled through the crowds to some event. There aren’t just TV stars: also authors, movie stars, comic book artists and writers, animators, publishers, and directors. Upstairs is a huge area set aside for autograph booths, and down on the exhibition floor are scheduled events with specific stars and authors (there are a LOT of book publishers at the con, although their booths a quite a bit smaller than the movie studios’ booths). 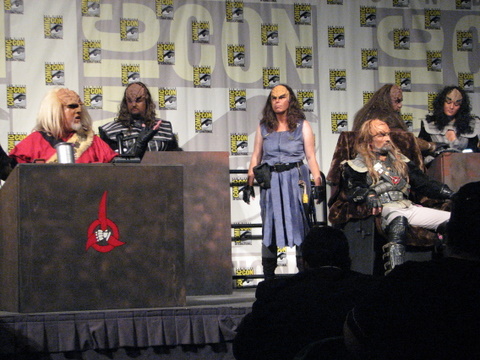 I’d be hard pressed to pick out my favorite event, but among the top few would be the Klingon Lifestyles session on Friday evening. An amateur production, each year this group puts together a 45 minute play focusing on the IKV Stranglehold, a Klingon warship and its adventures. Pure tongue in cheek, enthusiastic fandom with loads of inside jokes. These folks are fun. 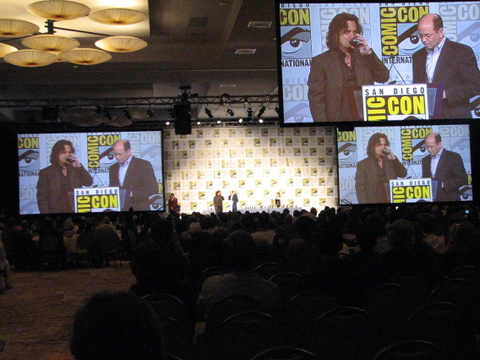 The Eisner Awards are the comics industry’s equivalent of the Oscars. Lots of dressed up writers, artists, editors, and publishers. This year, the convention expanded into the neighboring hotels and so the Eisner’s were presented at the Hilton Bayfront Hotel. Here you can see Jeff Smith and Terry Moore announcing an award. 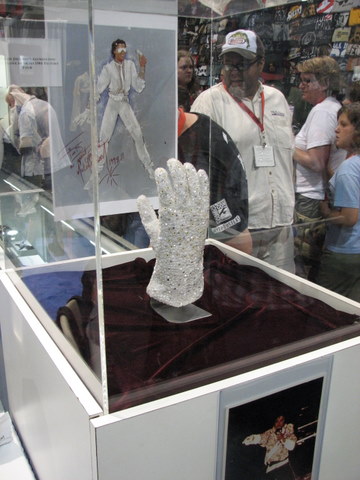 One of the weirdest things (and at Comic-Con that says a lot) was Michael Jacksons glove on display. Yup, that’s his glove from Thriller (… or whatever) that’s on tour, and of course, it had to make an appearance at Comic-Con.

Upstairs at the convention center is the Art Show. Small spaces can be rented by amateur or professional artists for displaying and selling original artwork without having to rent and staff a booth on the convention floor. So, pictured here is the table I rented with a variety of turned items in my Script series.Â  This year I sold 7 items: vases and dice with Vulcan and Romulan script. Sweet! 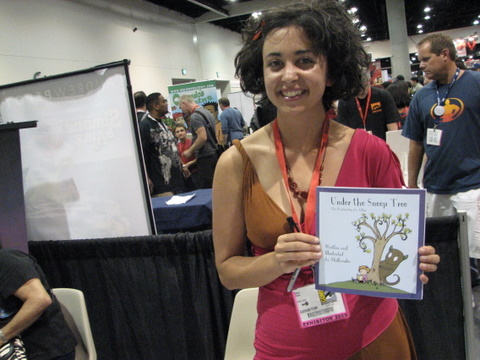 Molly Hahn is a friend from my improv class and also an illustrator who just completed her first children’s book. She had a table in the Artists Alley section and sold out her inventory at the convention! It’s a very cute book and I was able to snag a copy early.

I didn’t get a picture of them, but I ran into my buddies Wayne Sherman and Jed Dougherty a couple of times during the show. Jed’s an artist trying to break further into the comics industry (click on the link and check out his art…now, I’ll wait) and Wayne is a comic and gaming geek who tries to find the strangest stuff each year at the con. I’ll have to check with him on what won this year. 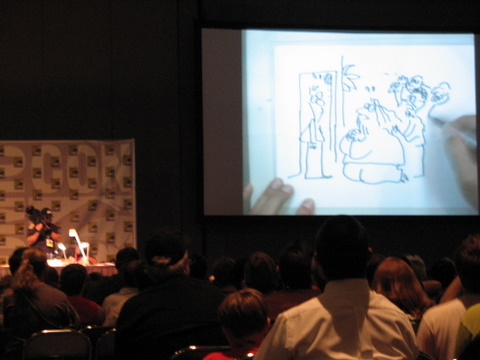 There are several art related events that happen during the convention (beyond the whole COMIC BOOK thing). This shot is from the Quick Draw, where three different illustrators are given odd little challenges and that require quick illustrations. Here, Sergio Aragones (who is the fastest artist I’ve ever seen) is illustrating a story he’s telling about the staff at Madd Magazine during a holiday in the Caribean. There were several other events with artists working live, and there are pictures from those events in the album. 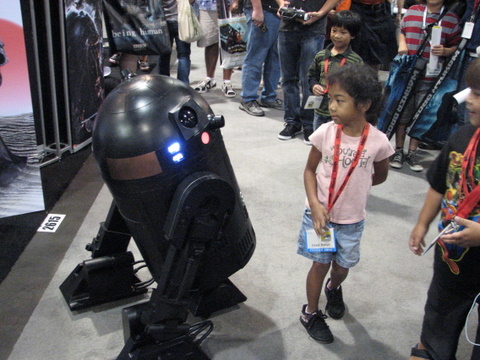 Just a reminder that it’s not just adult geeks wandering around the convention center buying stuff. There are a lot of kids and come on – how cute is that! 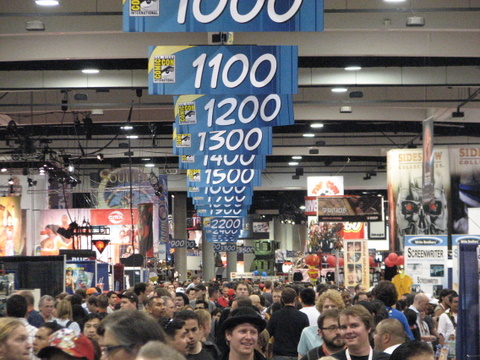 It’s hard to grasp the size and scope of Comic-Con, and I can’t even touch upon all the events that occur. There are hundreds of conference sessions, scores of celebrities, hundreds (thousands?) of vendors, and 125,000 attendees. This picture just captures a small portion of the exhibition hall: the aisles start with 100 (way behind me) and continue on to 5200 (way ahead of me). 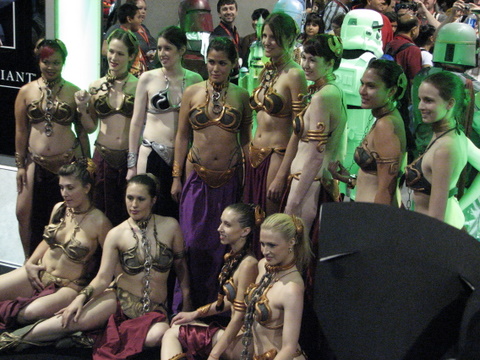 I’ll end this summary with a couple of samples from the most showy part of the convention: all the costumes. It’s impressive with all sorts of genres represented as well as a wide range of costume quality on display. On Saturday night there’s an event called The Masquerade, which is a huge costume contest that includes music and choreographed dance. This picture is from the Leia in Metal Bikini meetup: a popular costume from the Star Wars: Return of the Jedi movie. 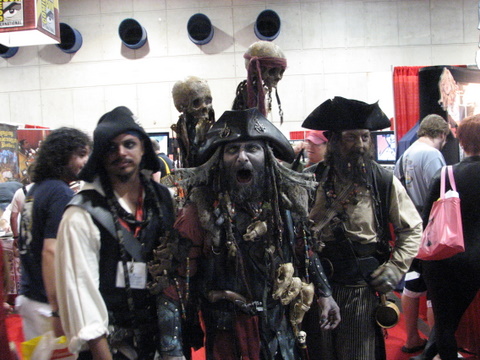 These guys had the scariest costumes with the guy in the middle being pretty startling. You can’t make it out, but he had LED’s glowing at the tips of his dreadlocks. When he came at you, you’d step back and your heart skipped a beat. 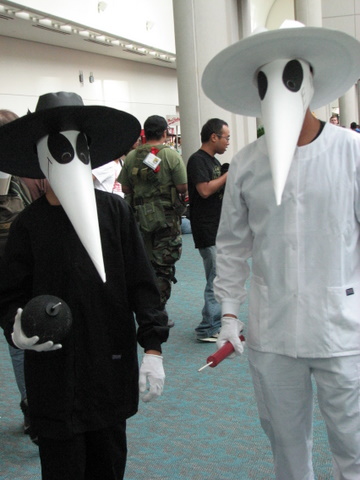 And I thought these were the most original costumes – Spy vs. Spy from Mad Magazine. You can see a lot more examples of costumes in the album.

And that’s my report from this year’s San Diego Comic-Con. I came home with a LOT of stuff: comics, art, collectibles, and a lot more stories. I may get around to posting some of it, but for now let’s just call it an embarrasement of riches.