There isn’t a cheap flight. There isn’t a flight, period. Back on the bus. Seven hours. We can do this. We’re first to be picked up by a new-ish minivan and score the choicest seats. We’re psyched. Okay, well, we’re not psyched but we’re not in a state of total dread.

For six hours, we drive nothing but hairpin turns with one-room bamboo houses dotting the roadsides in what seems like the middle of nowhere. We stop once for a short toilet and snack break at a little village in the mountains. A young woman pumps out tuna sandwiches at twice the speed of your most efficient Subway employee. We stop a second time along with all the other minibuses, cyclists and buses for lunch in a little crossroads town. The “market” is maybe 50 feet long. The “bus stop” food is remarkably good and cheap. The toilets, however, are squats. Grateful that I have strong thighs…

The final hour, the road begins to straighten, the landscape changes to more gentle slopes; the driver dodges more little pigs and cows than chickens; the temperature drops. We’re close.

The relatively new city has all the charm of a strip mall. It’s a hodge podge of neo-Lao concrete buildings, old wooden shops, markets filled with cheap goods from China, and a smattering of hotels and guest houses. Ours is off the main drag, behind what used to be an airstrip. 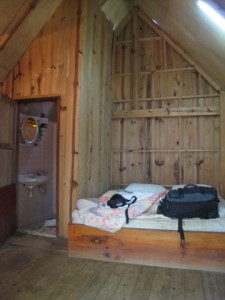 Built by the owner when he was a child 20-plus years ago, the two-story French colonial home sits beside the restaurant/bar and a half dozen cottages. We’re lucky to nab the the last one. En suite bathroom. 60,000 kip. About $7.50. Score.

After checking in, we continue our education about Laos, the Secret War, and UXO (unexploded ordinances) with a visit to the MAG center. 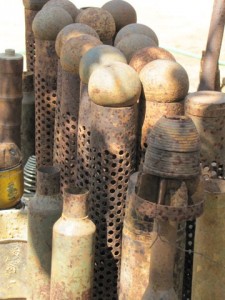 We drop some money there. Not enough. It can never be enough. We’re in the province most heavily bombed in the war. The US dropped more than 2 millions tons of bombs here — more than on Germany and Japan combined in WWII. Thirty-five years later, the bombing of this peaceful place continues with UXO being inadvertently detonated by farmers, scrap metal collectors, pond diggers and children.

In the morning, we take a spin through the market  to buy our picnic supplies and snacks for the day. We drive to see lots of bomb craters and our first UXO in situ. Here, our happy-go-lucky guides who speak excellent English from watching HBO, take a more serious tone. 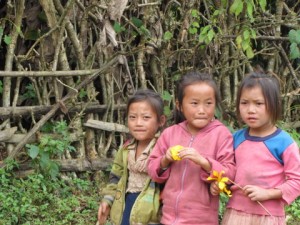 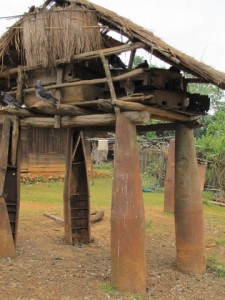 There is no animosity toward the U.S. now, but there is a very reasonable frustration that efforts/money to deal with UXO are slow and small. There is a well-founded fear that his own newborn daughter and her generation will likely live their entire lives as a potential victims.

Our first trek is to a quiet little village where bombshells have been used to build house supports, troughs, planters, fencing and more. There are scores of very young children around who attend school and/or take care of the house, younger siblings and animals while the older children and adults are busy with the rice harvest, several kilometers away.

The two Austrians, two Swiss, one Scot and one German-Scot, ein Berliner, the two from Uruguay and the two of us pile back into our minivans and drive to the start of our hike up to the waterfall. After our picnic lunch, I have my very first little leech experience. Both leech and experience are small. The hike is spectacular.

We end the afternoon at the Plain of Jars. 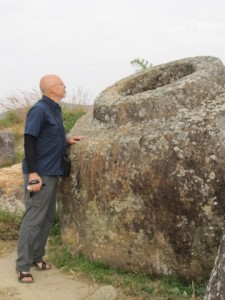 We’re intrigued by the mystery of how and why these gigantic stone jars exist — as are archaeologists — and the jars themselves are pretty cool, but I am a bit underwhelmed by the site itself. There could, however, be dozens or even hundreds more jars. Again, the presence of UXO hamper the discovery process. With funding from NZAID, UNESCO and others, MAG has cleared 127 UXO and provided markers to keep visitors on safe paths through the site. Laos will remain a poor country until all the UXO are eradicated. It is impossible to develop without an infrastructure, and that requires building the basics like roads, irrigation systems, schools, shelter. 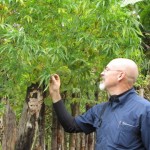 Our tour concludes at the guest house restaurant  where Kong’s wife has turned out another fantastic meal for the group. Following dinner, we watch a fascinating PBS documentary about the Secret War and UXO. What surprises me more than anything is that we’re still using cluster bombs (“bombies”). I can make it through only half of the second video which documents the work of one of an Aussie-based recovery/removal team. I’m already obsessed (had you not already noticed). It’s not until the next morning we realize our tour coincided with Veteran’s Day in the U.S.

Click on the thumbnail of Alan examining the herbage to see more photos from Phonsavanh.When you have a few extra minutes (and surely you must if you’re slogging through this blog),please check out the MAG website to learn more about their life-saving work and mission to change the legacy of Laos. http://www.maginternational.org/