We’re well past our first hour of the road trip to the north, i 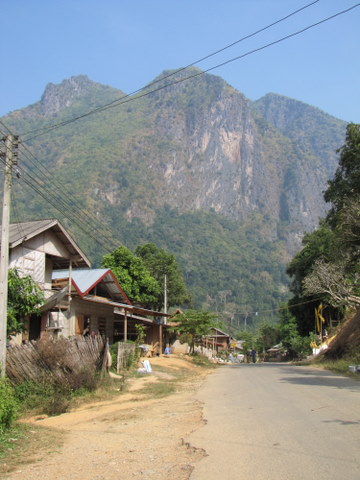 f you don’t count the 90 minutes of trolling guest houses for other riders, van driver negotiations, and passenger swapping at the northern bus terminal. The minivans appear to be relatively new Hyundais and Toyotas – except for ours – an aged, shockless, padless, 12-seater, belching diesel exhaust inside and out. Those of us in the back half have fashioned face masks from whatever we’ve crammed into our day bags, not that any of us would have thought ahead to pack air filters in our packs now strapped precariously to the top of what we think might be some passive-aggressive attempt at payback for the “Secret War.”

In spite of the incessant jostling and noxious fumes or maybe because of them, we doze on and off. I am awakened by a collective shriek from the front of the van. Did we pass some dead animal in the road? I look up to see that the French Jimmy Fallon look-alike with black curly hair has buried his face in both hands. Did we swerve to avoid a chicken, a dog, a child? I didn’t feel any change of direction or speed. I look questioningly at Alan who says, “an accident.” Our driver doesn’t stop or even slow. We turn to look over our shoulder to see a small, 2-bench, open “bus” on its roof in a ditch with at least two people crawling out of the wreckage. The German girl who saw the entire incident unfold, explains that it was the vehicle that had been traveling directly in front of ours that for no apparent reason swerved across the road and flipped over. Jimmy Fallon had thought it was coming right at us. No wonder he is ashen.

I am grateful that we made a donation at the temple yesterday. I am grateful when we finally arrive at our destination hours later, exhausted, knees bruised, lungs bursting, backs aching, and alive.

The further we drive from Luang Prabang, the more we feel like we’re in Laos. Open fronted shops give way to fewer wooden structures and then small clusters of bamboo and wood houses between miles of greenery and tiny villages. We don’t see the abject poverty we’ve seen in India or Madagascar, but it’s obvious Laos is a poor country where most of the population depends on subsistence farming. And that is complicated by the tens of millions of UXO (unexploded ordinances) littered throughout the country. (More on that later.)

The minibus deposits us more than two kilometers from the center of town, so in sweltering heat we begin our first “trek” toward the area with several  guest houses. We look at a highly recommended place on the riverfront but it’s much more than we want to pay. The little place next door doesn’t have the attached restaurant or pretty landscaping (yet) but has comparable rooms and is a quarter of the price. Unfortunately, it also has only a squat toilet in the cabin we like. 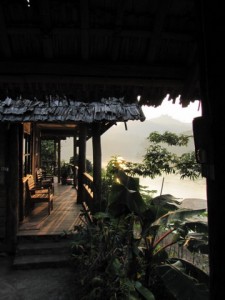 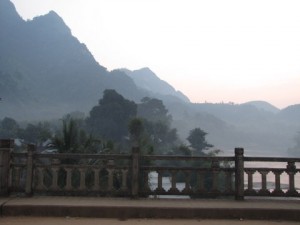 We trek up the road and stop at a restaurant where I proceed to have a little heat stroke while Alan continues the search. The champion hunter-gatherer has scored us a  place close by, nearly as nice as the first, also on the riverfront, for a mere $16. He’s not a good bargainer so we’re likely paying an extra $6, but I’m happy to pay anything at this point. 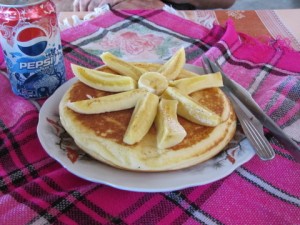 It’s not much of a town but the setting is quite beautiful and the food at the tiny joint down the road is some of the best we’ve had. My simple “Lao breakfast omelet with eggplant sauce” turns out to be a large omelet with a lot of dill, a basket of sticky rice, a plate of greens, and an eggplant dish that tastes like babaganoush with extra garlic and chili. (about $1.75) Alan orders a banana pancake thinking it will be a small crepe with a few slices of banana.

Nong Khiew is a starting point for many boat trips up the river and treks to small(er) mountain villages. I don’t know that life has changed much for the villagers since our first trek/stay in the hill tribes 20+ years ago and, admittedly, our heartier, sleeping-on-dirt floor days are behind us, but we encourage the backpackers we meet to experience the homestays that are available these days. We’re told the villagers get a percentage of the “tour” fee. One can hope…

We spend a morning hiking to the dramatic limestone caves where Phathet Lao soldiers lived/hid during the war. 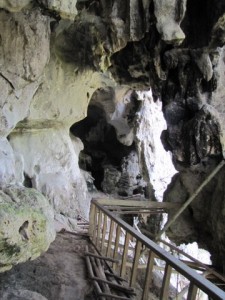 Along the way, we meet only an elderly French couple who travel as roughly as any young backpackers we’ve known. They tell us about several nights sleeping on the floor of a boat as they cruised up the Mekong. We don’t complain about our ride out of town in an air-conditioned minivan.