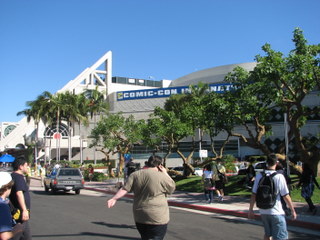 So after a long hiatus, what would it take to finally get me back on this blog again? My annual trek to San Diego for 5 days of pop-culture based geeky goodness: San Diego Comic-Con International 2008. Of course!

I try to explain to folks how this convention (the Con) is more than just comic books. That’s its core, sure, but there is a lot of media represented here. TV and movies have a huge presence, as do traditional print publishers. And so this event has a diverse mix of people, from costumed fans to Hollywood fashionistas to poorly dressed geeks <raising my hand> to New York suits. This year, the Con has completely sold out, so the expected attendance is 125 000 people. 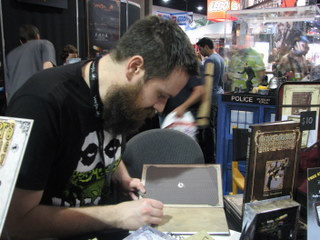 I drove down to the Con today (Wed.) because I have a full event pass. That includes all 4 public days (Thurs. through Sun.) plus a special Preview Night on Wed. evening. After logging into my hotel (and one other task I’ll mention at the end of the post), I got in line for the special 6 pm to 9 pm Preview Night. 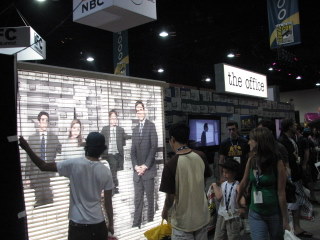 Traditional long lines start the evening with a sudden rush when they open the door (or as much of a rush as you can muster when tens of thousands of people are being herded into the exhibition area). There are no other events happening during the preview night, so everyone is here just to see what’s in the exhibition hall (and gather up lots of free stuff!). 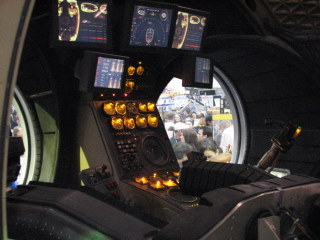 I’m not terribly organized on Preview Night – other than having a list of booths I want to hit first because of limited amount of swag. So, I let events pull me in one direction or another. I find that a crowd reaching out to get something tossed out for free is like a flame to my moth. I stick out my hard for whatever free thing comes my way. 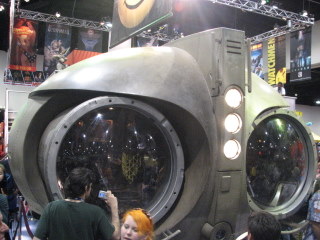 Or, I get distracted by some movie or TV prop. There’s an NBC presence with displays for Heroes as well as The Office. I saw the slick new car for the upcoming James Bond movie Quantum of Solace as well as the Nerd Herd car from the TV show Chuck. Movies currently in theaters had a presence (Hellboy II) as well as those still in production (Watchmen). For those in the geeky know, I included pictures of the Owl’s flying craft which was here on display: both the interior and the exterior. 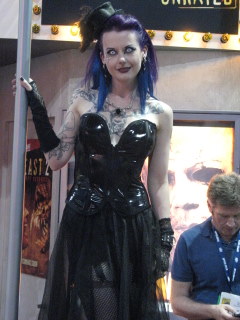 There are plenty of traditional Con events: authors and artists signing their wares and models in costume promoting one thing or another. And there was lots of lots of stuff being given away. I was trying to avoid hauling back as much stuff as in the past, but I still came away with a bag full of free books and knick-knacks, as well as stuff I had to buy since they were “Comic-Con Exclusives”.

Usually, I don’t see anyone I know at these events. But this evening I was accosted by my friends Wayne and Jed. Wayne has a game he plays every year that I’m going to join in on. What’s the best T-Shirt slogan and what’s the most grotesque (or inappropriate) item for sale. There should be plenty of contestants. 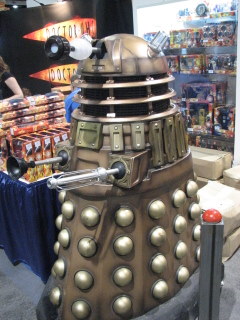 At 9:00 pm, I was one tired (but happy) camper. It’s a lovely evening in San Diego, and even though it’s a moderately long walk back to my hotel, carrying a heavy bag-o’-swag, I’m here with “my people” and it’s all good.

I found a Mongolian Barbecue at the Horton Plaza for dinner and I’ll try to catch up on some sleep tonight (well, that didn’t happen. It’s 5:30 am as I work on this post).

So, here’s what’s made this 2008 event different for me from previous Cons, and why I came down to the event a little early. For the first time, I’m publically displaying (and selling) my wood-turnings. There is an amateur Art Show that’s part of the Comic-Con, and tables are available to rent. I’ve been enjoying my Script series of bowls and other turned items, so I decided to really let my geek flag fly and use a variety of genre-related, fictional alphabets to illustrate some of my work. The picture shows my space all set up. For a more detailed view of the individual items, you can check out my website at www.alanirwinart.com. It’s still under development, but the items are there for viewing. 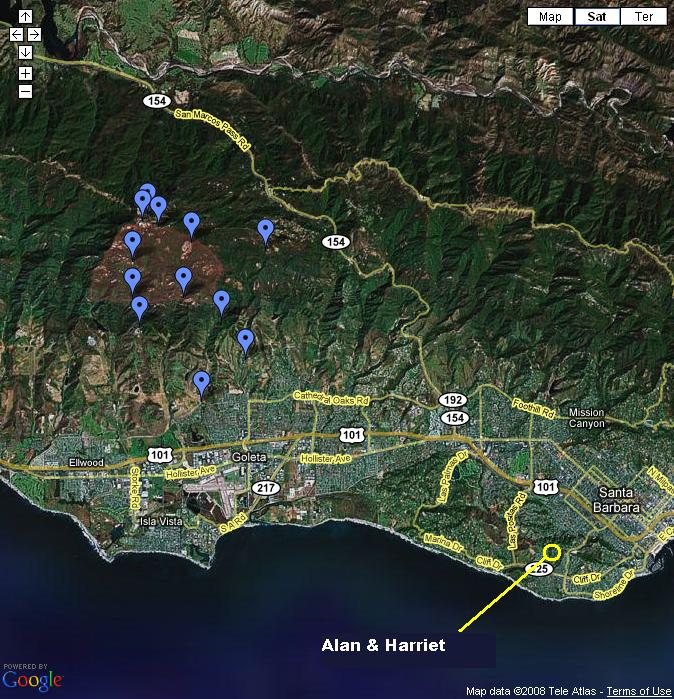 A quick update on the Gap Fire in Santa Barbara County and its impact on us. So far (11:00 pm on July 3) we are fine. As you can see on the map (the blue markers are area landmarks either in the fire or near the fires boundaries), we are out of the danger area. The fire has burned over 3 000 acres and threated over a 1 000 homes, but so far no structures have burned. We know folks who have been evacuated, and Diane and Laura’s home is just outside of the current Evacuation Warning area.

Power has been iffy, so I’m glad to get some time to update the blog. There is a lot of smoke, but the winds haven’t been too bad so far. The biggest problem we are having is getting current information. The latest we’ve heard is that we are now designated as the most important fire in California, and so more resources are coming in to fight the blaze. I imagine this is because so many homes are threatened.

I’m going to keep this brief since the situation is changing so rapidly. Again, Harriet and I are safe, and we are keeping an eye on Diane and Laura’s home in case they are designated as an evacuation area.

Okay, the coolness factor at Comic-Con just went up a notch. It turns out that the Obama campaign is exploring the idea of having their candidate show up at Comic-Con. There isn’t a lot of information beyond the fact that an exploratory call was made, but I can see how an appearance would appeal to the youth vote.

Or at least the geek vote.

And I bet that’s a much bigger demographic than most folk realize. 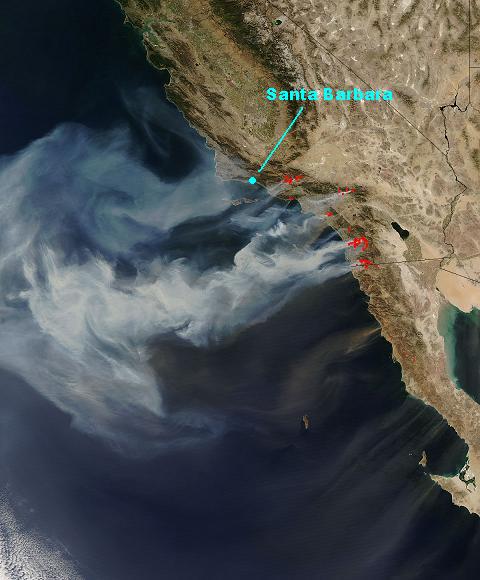 This is a satellite image of the fire areas taken on Tuesday, October 22. I’ve pointed out the location of Santa Barbara to assure our friends that we, personally, are not in any danger. There are fires in Santa Barbara County (which is why the national media keeps mentioning Santa Barbara), but the real impact is south of us.

As of now, over half a million people have been evacuated from their homes. Our thoughts are with our friends and family members who are impacted by these fires. Harriet and I will continue following the progress of the (amazing) emergency response teams as they fight the fires.

If I were anywhere near Atlanta this weekend, nothing would keep me from this event. A bowling challenge between the MurrFurs and the USS Republic Klingons. Two geek subcultures going toe to … err … claw to claw on the lanes.

This is the kind of culture war that I think is a model of conflict resolution for us all.