Alan is up early, putting on his SBIR shirt and good shoes, reviewing materials, practicing a few words of Thai, readying his materials. We have “American” breakfasts and then get on the road to work… er.. first to the bakery where our hosts load up on the little cakes and pastries that we never see again. We drive to the “base” which is…rustic. There’s a lot of sitting around and sodas and waiting for who knows who or what. As the week progresses, we will learn there is a good deal of that. Everyone is very friendly. Eung is “one of the guys” and shoots the breeze with the brass. By the end of day two, I’m cracking jokes with one of them. Of course, he’s three sheets to the wind after Happy Multi-Hour, which started for him at 3:00, so he thinks I’m hysterical. Pink is feeding everyone snacks. Alan has lots of work tales to tell that are probably best not shared on the web. 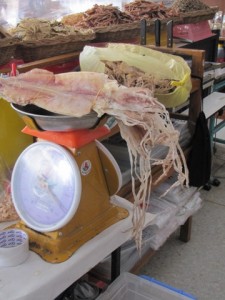 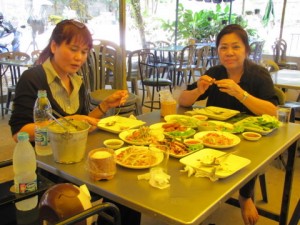 Eung, Pink and I begin our ladies’ day out. First stop, the dried fish shop. I’m into it. Totally into it. My favorite is the long, thin-as-potato-chip variety with a smoky BBQ flavor, but I do like the jerky-like curls as well. Then, since it has been almost two hours since breakfast, we head to lunch in Pattaya where Eung and Pink order up seven (count ‘em, SEVEN) dishes plus sticky rice. For the three of us.

They take me to the magnificent, 20-story Temple of Truth which is built (rather, in the process of being built) without a single nail, and

I join an English-speaking tour guide; a couple very fun older German guys whom I enjoy until I realize they’ve hired Thai “wives” for the week; and a young Cypriat interested in Buddhism who is thrilled I can speak a few words of Russian including, “Excuse me please, where is the toilet?” and “What is that? That is a lamp.”  (Click on the photo at right to see more from the temple .)

Eung and Pink are bored with the tour. I am completely enthralled watching the artisans sculpt this teak and redwood temple that has yet to be completed after 30 years. They decide it’s time for us to get massages. Really, really, really good massages. Oh, I am a happy executive wife-equivalent. Later, they may suspect I am less enthusiastic about visiting the outlet shopping mall, but Eung needs to pick up a few things so I try to act interested. I’m tempted to buy a Wacoal bra for a mere $12 but don’t want to risk the humiliation if they give me that look of “we no sell XXXL size for farang who has had too much sticky rice and chicharones.” I want to tell them I’m just retaining a little extra water from so many salted fish treats, but we all know that’s not true.

The next few days and nights Alan and I try to look interested in everything, but not too interested because Rep, Eung and Pink will buy whatever it is we look at too intently or order another dish of something and shovel it on our plates. There is also a lot of sitting around and killing time watching other people sit around and kill time; there is a lot of being plied with soft drinks and water and snacks courtesy of Pink and the Royal Thai Navy; there is a lot of smiling and nodding and joking around; there is Alan’s unending patience around work (be sure to ask him his lucky number story); there are too many enormous meals; and there is a lot of driving.

GIRLS JUST WANT TO HAVE GUN

We spend time at Eung’s office – although we don’t know why – and see some of her products. She owns a company that manufactures and sells armor (protective vests, helmets, etc.) to the police and military. Some women love shoes. Eung loves guns. We see several from her very large personal collection – not small pistols one might carry in a little clutch purse for self-protection – but big, honkin’ Lugers, a few semi-automatics and a couple of revolvers.  And those were just the ones in her  desk. She and Pink laugh a lot. She makes me laugh; she makes me a bit sad. Pink mothers her (and everyone else) a bit. I think she and I both worry about Eung’s need to down several Singhas every night although I think I understand why. Stories about her previous career available off-line.

We’ve been treated extremely well, and Alan has more than earned every baht they’ve spent on us. He is tired. It has been a very full week.

One thought on “Alan Works, Harriet Does Not”