For those of you not (yet) into Twitter, here’s Alan’s first tweet from Aswan: â€œAswan is a sleepy little town. Harriet bought two souvenirs and then slept for 12 hours. Bargaining is hard.â€ 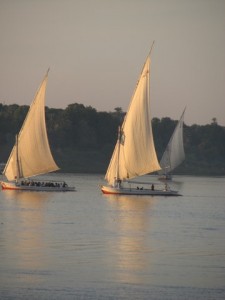 Aswan is a nice little city on the Nile â€“ sort of the Cancun of Egypt with dozens of cruise ships disgorging tourists on a daily basis. The major souk street is several blocks long and partially shaded so it makes for a pleasant enough pedestrian mall despite the constant badgering by shop keepers dependent on tourists for their economic survival. There are the usual lines (in English, French, German, Spanish) — Where you from; Special price for you; No charge for looking; No hassle; How much you want to pay? — and there were a few that actually got our attention: Aloha; Only one million; and our favorite, Hello Mrs. Kojack. 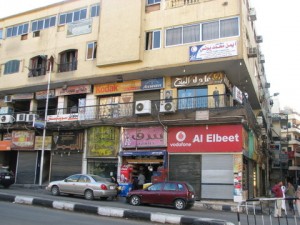 The stuff is mostly schlock, except for the pashmina scarves that I’m pretty certain are imported from India, so there was little temptation to shop. (For those of you joining us for Thanksgiving, don’t despair; we’ll be sure to pick up your schlock â€“ I mean, party favors — in Cairo.)

After shunning the touts who wanted to charge 25 Egyptian pounds (about $4.50), we joined the locals for a short ferry ride (about 18 cents) across the Nile. Steered by the Duffus Brothers, as Alan named them, men were seated in front, women in back. (No Rosa Parks anywhere in sight.) Engine failure, panicky brothers, boat change, no one surprised â€“ just like an average day on MUNI. 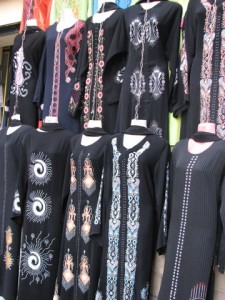 Quick fashion note: Speaking of women in back or in black, Nubian women, for the most part, wear the all-black jalabas with black beading (nice tone on tone) or vertical silver designs for a little fashion flair. Except that I know they must feel like portable saunas, I appreciate the interesting patterns and subtle differences. 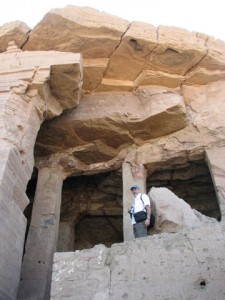 Once on the western bank, we hiked up the sandy hill to the Noble Tombs which were carved out of the granite mountainside, the final resting place for the priests, princes and governors who controlled the Nubian trade. This was our first encounter, up close and personal, with columns and walls elaborately etched with hieroglyphics and drawings â€“ in situ. And save for a nice guy from San Francisco and the camel taxis at the base, we had the entire site to ourselves. Very cool.

From there we decided to follow the lush shoreline toward the mausoleum of the Aga Khan and St. Simeon’s monastery. Problem: nowhere to walk along the water’s edge. Solution: walk along the sand dunes. Problem: Sand … and heat (Alan describes the hike as stupidly long, idiotically hot. I would describe it as wandering in the desert for 40 years cloaked in a fleece-lined down jacket.) So NOW where are the freakin’ camel guys when you need them? Evidently, even the camels stage a strike every now and then. Those beasts of burden are smarter than we give them credit. They were certainly smarter than us. 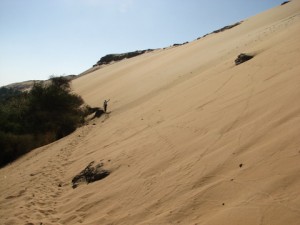 After one hot eternity, we arrived at the mausoleum where the tourist policeman sized us up as the sort of people who wouldn’t pay baksheesh (bribe), which is true, and told us the joint was closed. Fine. So we shuffled back down toward the water in hopes of hitching a falucca (boat) ride with some tourists who might soon be returning from their camel trek to the monastery. We failed at hitching a ride on their 30-seater ferry and instead paid someone to row us back to the east bank in his tiny dingy with oars of rough chopped 6x6s. No blades, no handles, just barely squared, splintered logs. For a mere 10 pounds Egyptian, the going rate for this sort of thing, this guy really needs to consider joining the camel union.

Kudos to Laura L who caught our 80s girl band gaff. It was the Bangles, not the Go Gos who sang â€œWalk Like an Egyptianâ€ however, the Go Gos did â€œVacationâ€ so we were writing with the same spirit (and big hair).

As for the pop quiz about the Great Pyramid of Cheops being only the second largest structure ever built, the correct answer (from my Cadogan Guide) is the pyramid of Cholula in Mexico. That was built 4,000 years later and mostly destroyed by the Spanish, so we’ll give partial credit to those who guessed the Great Wall or care to do more extensive research. 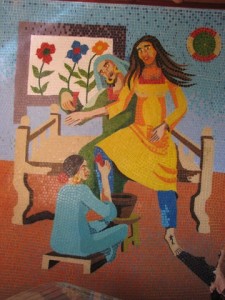 For those of you feeling creative, we’ve added a new feature to the blog called, â€œCaption, My Caption.â€ Challenge number one: Provide a caption for this mosaic on the terrace wall of Happy Land Hotel, Luxor.

Next up: Dam(n) Good