Here’s the crowd waiting to get into the Comic-Con on Saturday, Day 3. This was the day that everyone feared since it’s been sold out for weeks. Frankly, I don’t think it was that bad. Or rather, it wasn’t any worse than Friday, and that’s probably due to the fact that Friday ended up being sold out, also.

One of the differences on Saturday is that it’s heavily booked with presentations by the big movie and TV studios. Although I didn’t attend any of the presentations, I will admit to standing in line to get a few autographs. This is Amanda Tapping, one of the stars from the Stargate franchise. 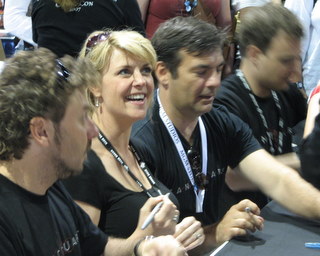 This autograph booth was promoting her new project Sanctuary, a video series available only on the internet. So far there have been 6 webisodes, and I’ve devoured them all. The special effects are amazing, and the production values are stunning. Don’t think YouTube quality, think DVD. Anyway, she was delightful with the fans and it was probably the best organized line with the nicest people I’ve experienced at any Con. 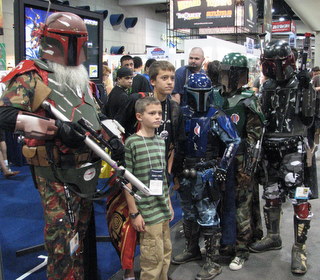 I’ve been struggling with my attempts to express the breadth of experience here at the Con. I realize the name implies comic books (although at least one person in my improv class thought Comic-Con might be a festival for stand-up comedians), and there are a lot of comic book creators and publishing houses.

But, nowadays they are not the major players here. I’d be hard pressed to identify one industry as dominant.

I’ve mentioned the movie and TV studios quite a bit, and they probably had some of the biggest booths. Sony Pictures, LucasFilm, Disney, Warner, and New Line were all pushing their upcoming movies. Sci-Fi Channel, WB, BET, NBC, Cartoon Network, and Starz were all promoting their current and upcoming TV shows. They brought stars, showed clips, sold DVDs, and gave out promotional swag by the bagfuls. All of these players are looking to generate a buzz among early adopters and mavens (for those into the Tipping Point references). It’s big business for them. 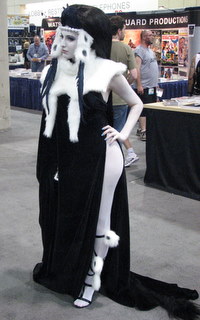 But the toy and game manufacturers have a big presence here, also: Hasbro, Mattel, Lego, WhizKids, and a lot you’ve never heard of – especially the Japanese manufacturers and designers. They had special give aways, contests, unique “Con-Exclusive” items; all of which I am a major sucker for. Hence my nightly review of what I carry out of here. 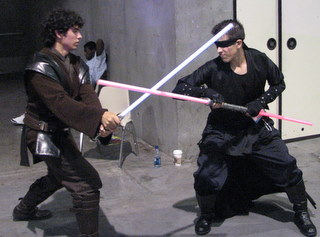 And then there are the artists. Many are mixed in with the publishers, but there are a couple of areas set aside for them. Artist’s Alley is the name of their primary ghetto where they sell original art, limited reproductions, prints, posters, and commission sketches. Some of these folks are the rock stars of the industry, with fans and wannabes surrounding them. Most are struggling to make a living, and conventions are a place for them to make some money plying their craft.

I think this last batch of costume photos have spoken for themselves. I just want to point out that this last one is a group of kids who happened to meet together upstairs. They are all in elaborate costume, and on their own they set up this image of Batman threatening a Jawa with a blaster as Darth Vader looks on. All the adult geeks in the crowd stopped with an “ahhh”.

I mentioned that Saturday has the popular movie and TV show sneak previews and panels. This is one line that snakes through the hall, out the door at the far end of the hall, and back along the windows outside. I can’t even tell you how long this sucker went. The start is not too far to the left, but the “middle” is some 100 yards away from me, and the end is somewhere very far behind me and to the right. I think they were in line for the Heroes panel, but I don’t really know (I was not in that line). 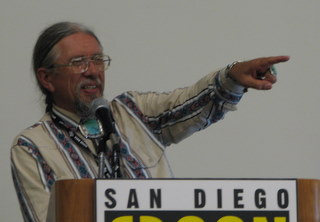 Saturday evening was a fund raising auction for the Comic Book Legal Defense Fund. They’re a first amendment rights legal defense organization that represents comic creators in a variety of censorship cases. Pictured here is Chuck Rozanski who served as auctioneer. He’s the owner of Mile High Comics in Denver, one of the biggest comics retailers in the country. He was perfect. An old hippy who is passionate about the first amendment, an experienced auctioneer, and a trader in comics and comic-art for many years. He has a great gift for gab, and kept us (or me at least) entertained for the many hours of the auction. Early reports are that they raised approximately $36,000. I know I contributed a fair share and came away with some pieces that I’m quite pleased with.

After the auction (I told you that these are long days), I caught the end of something called the Masquerade. Originally a costume competition, nowadays each entry seems to have some sort of performance component. My pictures aren’t very good since I arrived too late to get into the main exhibition hall and ended up watching on some big video screens set up in one of the ballrooms reserved for overflow viewing (this is a very popular event). Anyway, the costumes were over the top, 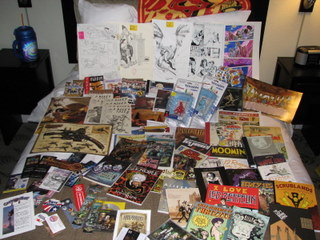 the skits were amateurish, and the entertainment value was out of this world.

And finally, a picture of Saturday’s acquisitions. My auction pieces (which I’m very pleased with) are lined up in the back. It was the end of a very long day.