This last weekend I attended the Alternate Press Expo (APE) in San Francisco. If anyone out there is unfamiliar with my geek credentials, let my report on this event be your first exposure to that side of my personality.

APE is “the largest gathering of alternative and self-published comics in the country”. You won’t find the traditional publishers of comic-book superheroes at this venue. This is a group for which traditional geek culture is too constraining.

I have always been a collector of traditional comics, but last year I discovered the small publisher’s booths at Comic-Con (I’ll be posting about this year’s event in July). I had such a good time that some of my fellow panelologists suggested that I attend APE. Boy, were they right. It was great. 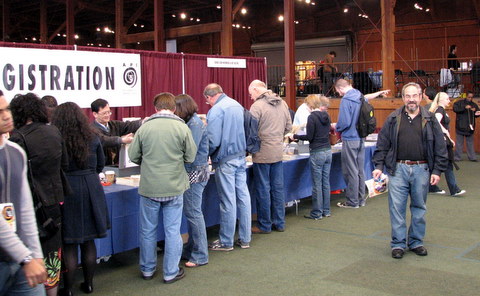 I drove up to San Francisco on Friday, and spent a couple of nights with friends Debbie and Tom. Tom was so intrigued by the event that he decided to attended the expo with me on Saturday (and is pictured, above). Debbie could immediately tell that this wasn’t her type of event (she is a wise woman) and decided to enjoy the day on her own.

We drove to the Concourse Exhibition Center where the show ran from 11:00 am until 7:00 pm on Saturday, and from 11:00 am to 6:00 pm on Sunday. The entrance fee is a whopping $7 for one day and $10 for both days. However, since I still had my Comic-Con badge from last year, I got in for free. Yay! More money for comics!

The range of publishers is pretty varied. There are individuals who hand draw their comic ravings, photocopy the pages and staple them into small books (affectionately referred to as mini-comics); small groups of artists who go in on a booth together to show or sell their artworks and sketchbooks; artist collectives who share the cost of publishing or marketing their comics; self-publishers who use vanity presses or print-on-demand publishing houses for their production; micro-publishers (one or two people) who have a couple of comics made by themselves and their friends whichthey produce and market under a single imprint; and small publishers who function as more traditional publishing houses and produce more professional work.

I’m not very good at estimating numbers for these events, but I would say there were several thousand people in the Concourse at any given time. And, I wouldn’t be surprised if the number of people attending got up to 10,000 over the course of both days. There was another mezzanine just outside of this picture to the left.

Although we broke off for lunch (at a fabulous Vietnamese restaurant) and then dinner (some great Chinese food at a real dive), when you include our exploration of the after-expo parties, on Saturday we immersed ourselves in that world for a solid 12 hours.

The next day (Sunday) I went back for another 6 hours before getting on the road to Santa Barbara about 5:00 pm. I finished seeing every booth at the show with less than an hour left before they closed the event down.

So, what did I leave with? I only have a rough count, but I’d say about 100 mini-comics, 50 or so comics and graphic novels, and about 10 books (very think graphic novels). I talked with dozens of artist/writer/publishers, saw hundreds of pieces of art, and tried to follow dozens of non-linear trains to thought (very alternative press). I’ve already read some delightful comics, but also some disappointing junk.

And I can definitly say I had a really great time.