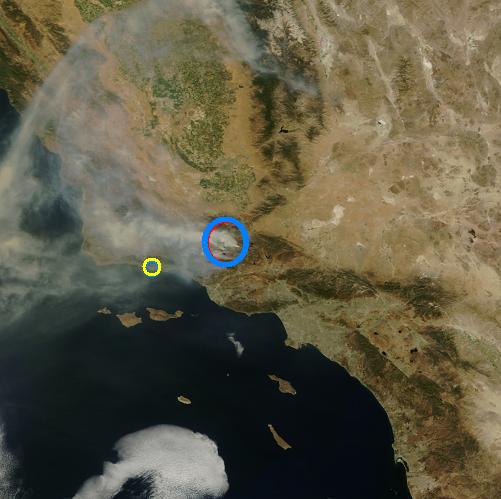 I haven’t yet talked about the Day Fire that’s burning in the area. As of Tuesday, the fire was up to 85,000 acres, and was only 30% contained. Until this weekend, it was just another brush fire in the SoCal area. But then, the offshore winds picked up, the size of the fire jumped up, and the smoke poured into Santa Barbara. The satellite picture of Southern California, above, shows the location of the fire in the blue circle. We are in the yellow circle. This picture is from Tuesday, since the since the smoke from the picture on Monday (the worst day) completely obscured the coastline and all the other geographic features.
First off, the fire is burning over 30 miles away and is threatening the town of Ojai. We are in no danger, here. Over the weekend and into this week, we have been covered by the smoke and living with a snowstorm of ash. I ran stadiums on Sunday with no repercussions, but a health warning went up later on Sunday and all outdoor activities were curtailed.

As of today (Thursday), the fire size is over 100,000 acres. The winds have changed and we are clear of new smoke. However, the prediction is for the offshore winds to return this weekend, so we may experience similar conditions. Again, it’s bothersome for us, but the real concern is for the folks in Ojai. They are under the threat of evacuations.